We’re nearing the second half of December, which means it’s starting to feel like the perfect time to look back and reflect. While 2018 was a year of many things, for us, it was also the first year we really got serious about growing our own fruit and vegetables. In this post I’ll give you an overview of what we ate and harvested from the garden this year, as well as a brief breakdown of what happened in the different seasons, including links to recipes, and my plans for next year. When it comes to food cultivation I’m  still very much a student, so this is by no means an expert’s guide. See it rather as an invitation to step away from whatever you’re doing right now, even for a couple of minutes, and come into the garden with me. 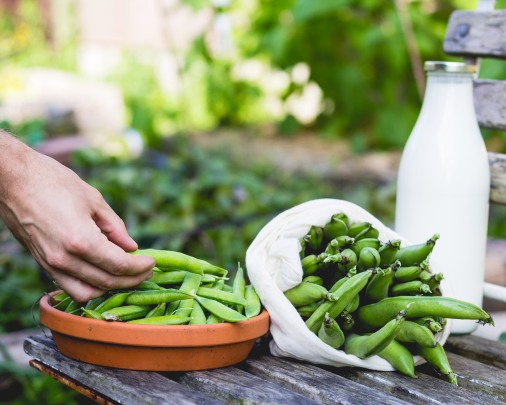 What we harvested and ate from our garden this year:

But next year I also want to try:

Garlic; aubergines; cucumbers; cabbages (to ferment); cherry tomatoes; more beans (borlotti or other kinds that can be dried and stored). 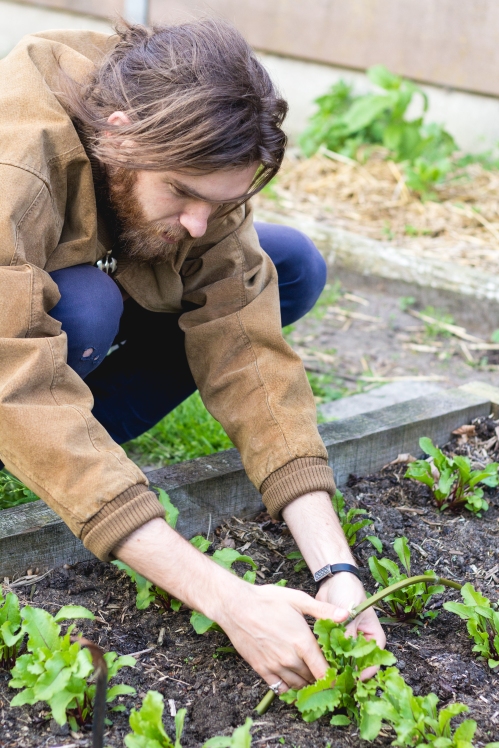 The growing season started with buying seeds, seed trays and bulbs. The green peas, broad beans, red beets and artichokes were sown in trays and lovingly raised indoors. Once they were big enough, we could plant them all out in our raised beds. All except the artichokes, which, being perennials, still needed a bit more time to develop before facing the outside world. 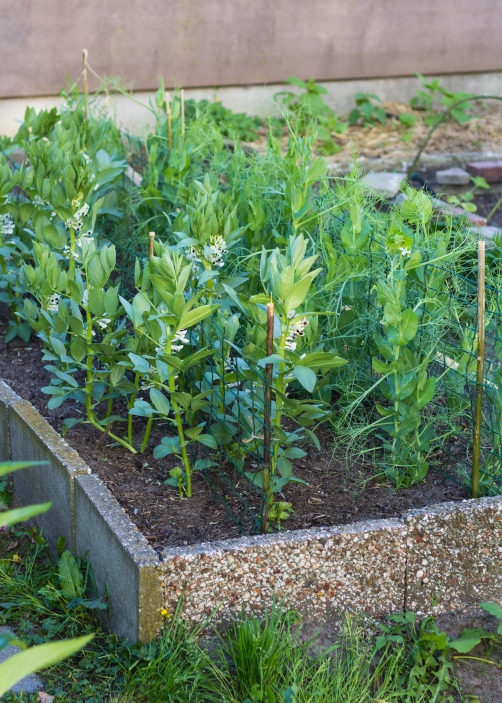 This summer was hot and sunny and with regular watering, the garden flourished.

The broad bean and green pea plants shot up well past their estimated height and they kept on giving. Produce this fresh doesn’t need much to be delicious. The first green peas of the season were sweet enough to be eaten raw, the first broad beans were perfect as a little snack, dipped in a bit of salt. Later on, I used them blanched in simple pasta dishes with lemon ricotta, as a delicious side with fresh mint and crumbled feta cheese, and in summer stews and Surinamese roti. The final harvest of peas was shelled and frozen for later use.

On a particularly hot afternoon we cleared a patch of land and planted out our artichoke ‘forest’. 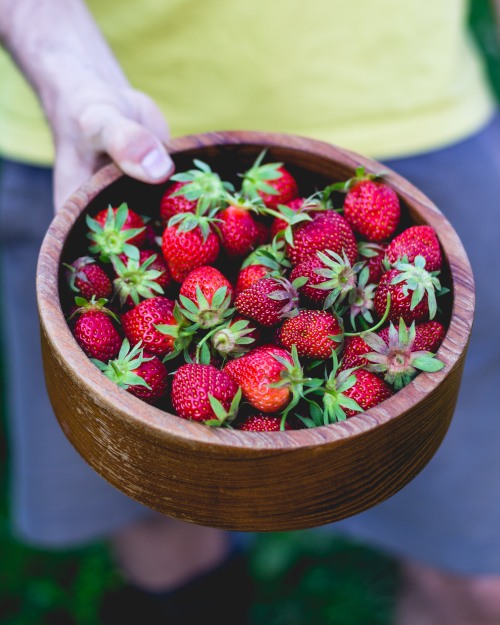 The strawberries were so sweet and plentiful this year we ate them by the bucket, straight from the bush. If we’d had a bit more self-restraint we might have used them in this chicory and strawberry salad.

Lettuce seeds were sown directly into the bed, and after a while we were able to regularly pick plenty of lettuce for all kinds of salads.

Most of the onions, which were planted in the raised bed next to the beetroot seedlings, also grew beyond our expectation, producing large, smooth and juicy bulbs. A few of them were harvested early as spring onions, which combined wonderfully with our green peas.

The beetroot, on the other hand, remained a bit smaller than we’d hoped, probably as a result of being a bit cramped due to overenthusiastic multi-sowing. Nevertheless, after some thinning we were able to enjoy a long period of eating beetroot and beet greens. The latter were a perfect addition to soups and stir-fries, while the beetroot itself was used in numerous different ways: from being briefly pan-fried with some mustard seeds and sea salt, to beet burgers, pickled beetroot and Indian curries. The final harvest was steamed, peeled and frozen for later use. 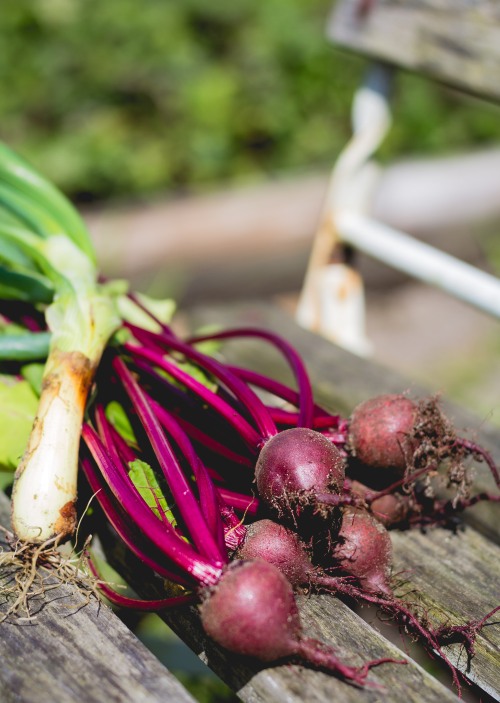 Courgette plants are known for their generous yields and ours did not disappoint. While smaller specimens could be sliced and grilled for use in pasta’s, pizza or salads like this one with lime and mozzarella, the larger ones were perfect for a simple soup with beet greens and mustard. 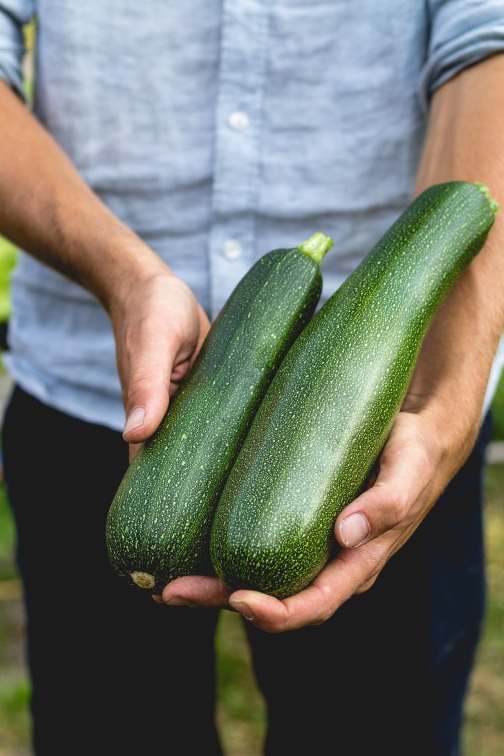 The end of summer also brought with it another surprise. Our artichoke plants, which were not expected to flower in the first year, had felt so encouraged by all that abundant sunshine they produced several baby artichokes. We ate them in the most traditional way possible: steamed whole, the leaves dipped in a simple balsamic vinaigrette. Needless to say, they were divine.

The tomatoes also did very well. They were firm and flavourful, ideal for sauces. The handful that remained green at the end of the season could be used for this spicy green tomato salsa. 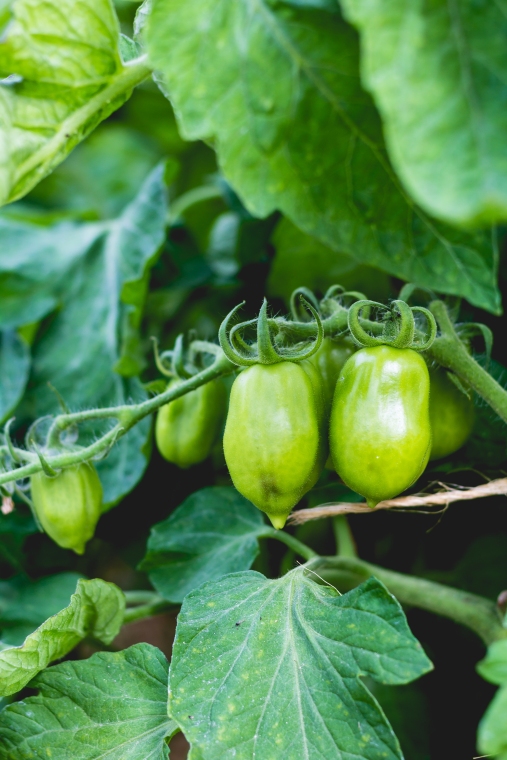 As summer turned into autumn we had an unexpected glut of escarole: a bitter leafy vegetable that can be sauteed like spinach or added raw to fluffy mashed potatoes with Gouda cheese, much as you would with the turnip greens in this recipe.

Although most of the fruit trees in our garden are still very young, a few plum trees that had been there since before we started yielded a lot of fruit. The plums we could reach were firm and juicy, the ones that fell to the ground were devoured by Domino, the resident farm dog. 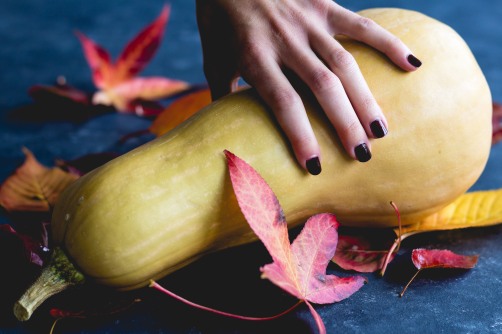 Next came large butternut squashes and slightly smaller, but equally delicious Hokkaido pumpkins. The squash was roasted and turned into soup, the pumpkin roasted with generous amounts of garam masala and eaten both as a side and as part of an Indian curry. 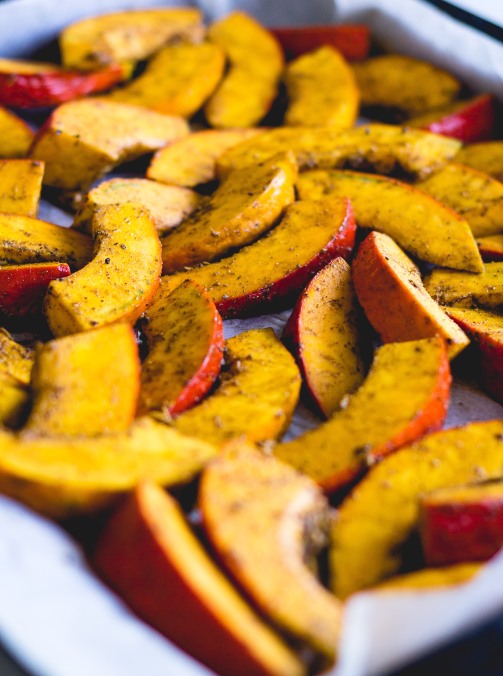 Hokkaido pumpkin about to be roasted in the oven with garam masala.

By now, the herb spiral we created over the summer also started to pay off. Rosemary and oregano was used for pasta sauces and these scrumptious roast potatoes, and the parsley, which keeps on growing was used for salsa verde, bulgur salads and herb oils. 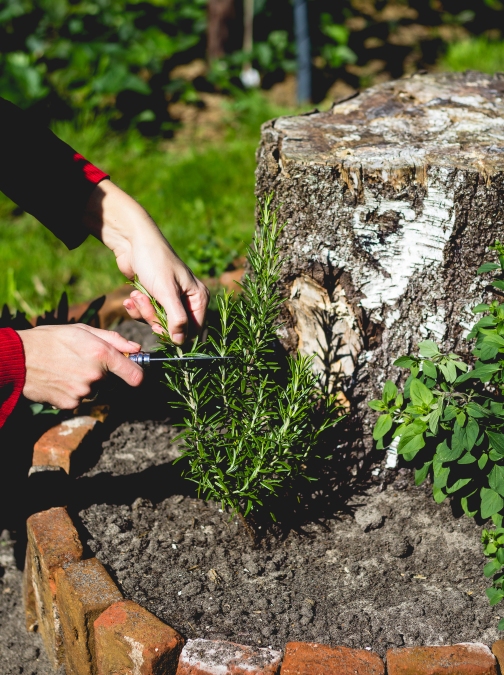 Cutting some rosemary from our herb spiral.

The start of winter marks a period of relative inactivity. Raised beds are cleaned and covered with a new layer of compost. The artichokes have been cut back and covered with earth and mulch. If all goes well, they should come out of hibernation next spring and grow new artichokes next summer.

Apart from a few herbs, and some final heads of escaroke, there’s not much to eat from the garden anymore. If we’d planned ahead for them, we might have cabbages or kale by now, but as it is, that will have to be something for next year.

However, in a season when most things die down or retreat, there are some fruits that benefit from a touch of frost, and even need it to reach their full potential. In comes the medlar. Medlars (or mispels in Dutch) used to be a popular delicacy in medieval times and also feature regularly on 16th century Dutch still life paintings. They’re even mentioned in (the uncensored version of) Romeo & Juliet where Shakespeare charmingly alludes to the medlar as an ‘open-arse’. By now, however, they seem to have fallen out of fashion. Now, I’ll be the first to admit that medlars are really rather weird. They have to rot before they’re edible (a process called ‘bletting’), meaning they’re very soft and squishy on the inside. In addition, each fruit also harbours about four large seeds, roughly the size of cherry pits. However, if you’re able to see past all that, you’re definitely in for a treat. Contrary to what you might guess from this description, medlars are actually surprisingly delicious, not unlike the inside of a mushy apple pie with custard and a touch of cinnamon. 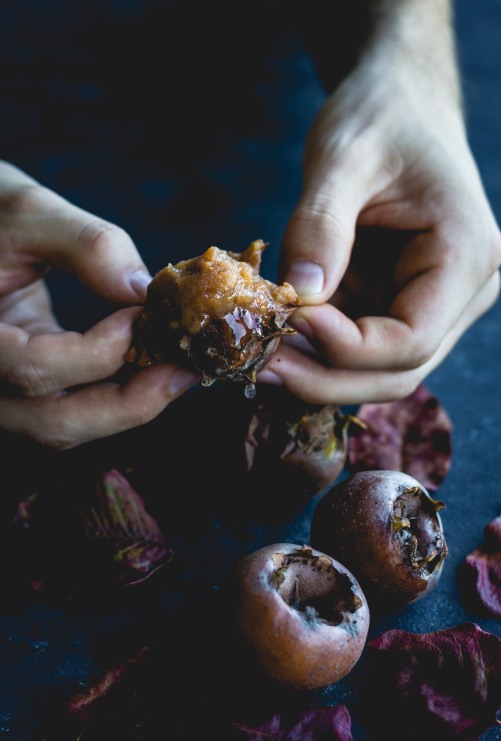 Welcome to Cuisine d’Eli! My name is Elizabeth and I’m a party caterer based in Utrecht, The Netherlands. Contact me for more information and bookings.