Much like the fireworks on new year’s eve all disappeared unseen into a thick shroud of fog, the culinary start of 2017 also wasn’t quite what I’d expected. Creating new recipes is all about experimenting with things that sound good in theory. So, to start off 2017, here’s the story of how I tried to make the perfect hasselback potato.

The idea was to make hasselback potatoes with miso butter and rosemary. In my head it sounded amazing: the oven-baked potatoes, the deliciously umami miso butter – almost like Parmesan cheese – and the fragrant rosemary. The miso butter  (4:2 butter to brown rice miso) was actually really delicious in real life as well, the potatoes themselves, well, they weren’t quite what I’d expected. 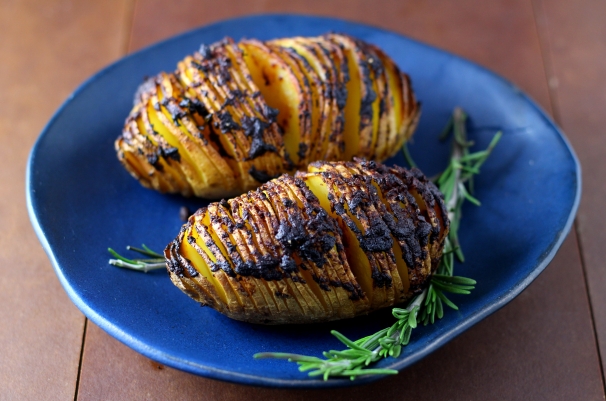 The problem, of course, was that I’d never made hasselback potatoes before. I’d seen them on photos and they always pleasantly reminded me of a certain type of wooden percussion instrument that goes by the charming name of güiro,  but I never really understood the point of them. When I started to read around online, almost every website told me the same: hasselback potatoes are amazing and combine the best of both worlds, i.e. fluffy baked potatoes underneath, crispy slices on top.

My oven is never as hot as it pretends to be, but even after 1.5 hours (!) on the highest heat some potatoes could only be described as slightly undercooked. This also accounts for the miso layer, which went from a beautiful brown to an entirely different level of caramelisation. Oddly enough, the biggest potatoes with the most tightly packed slices most resembled the internet’s lyrical description of the hasselback. They were soft and fluffy on the inside, and the miso butter on top was tasty and moreish.The smaller specimens, with slices that fanned out more, had decided they would refuse to be either soft and fluffy or crispy and instead settled on tough and slightly crunchy.

From a scientific perspective, I guess the hybrid nature of the hasselback doesn’t do it any favours. Whereas a jacket potato is cooked by the steam that is contained within its own skin (and sometimes an extra jacket of aluminium foil), and roasted wedges or slices cook in a layer of fat, the slices on top of the hasselback sort of just dry out and become tough, in spite of the butter.

Trying to spruce it up by putting in a golden fork.

I might be wrong though, maybe it’s not them, maybe it’s me. Is it me? Has anyone here made hasselback potatoes before? And did they combine the best of both worlds? Any good tips? I would love to try again.

Oh, and before I forget, happy 2017 everyone! Here’s to a new year of fearless eating, green living and making your own!

Leave a Reply to Julia B. Wilde Cancel reply