After posting about lentils and cannellini beans, I might as well complete this week’s legume trinity.

Edamame are young soybeans in the pod. Apparently, the earliest reference to edamame dates from 1275 when a  Japanese monk writes about receiving them as a gift. I don’t blame you for thinking that’s not much of a gift at all. I vividly remember an episode in a Japanese restaurant where a fourteen-year old me couldn’t quite get over the fact that my fellow (11 year old) diners  enthusiastically announced they were going to order a plate of soybeans. Ten years have passed since then and somewhere in between I learnt that their enthusiasm was wholly justified. Edamame are healthy, tasty and since you have to take them out of their pods one by one, eating them is also oddly therapeutic (think bubble wrap or pistachio nuts).

They are cooked and lightly salted, and all you really have to do to enjoy them is defrost them by adding them to a pan of boiling water. Leave to soak for a few minutes until they are nice and warm (although they are also very nice when eaten cold), take the smooth beans out of their soft, fuzzy pods and dip them in a little bit of extra salt. 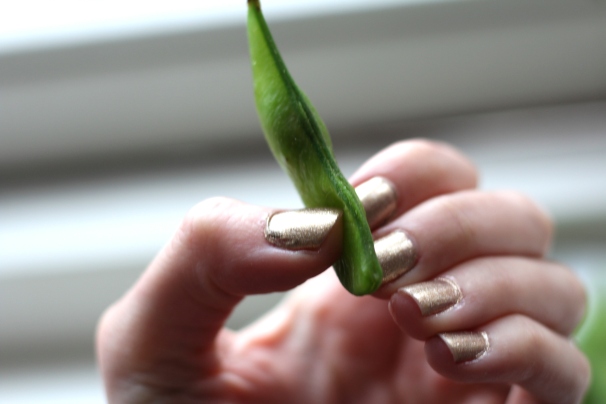 (Now for a totally unrelated topic: Don’t my nails look pretty? In keeping with one of my most revered annual traditions, my nails will be shiny and golden from mid- December until New Year’s day. Yes, this is important.)